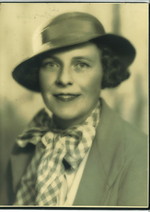 Olive Muriel Carty (1904-1977) was the second wife of Leslie Ernest William Carty, a well-known grazier of Brisbane Hill estate, near Hamilton in Western Victoria. They married on 20 March 1935. Their marriage certificate states that she was thirty years old and a spinster. He was fifty years old and a widower.

Olive’s husband, commonly known as Lew from the acronym of his initials, died in 1961 aged 76 from congestive heart failure after 26 years of marriage. There were no children. Being a woman of independent means, Olive determined she would use the inheritance her husband left her to establish a philanthropic fund to benefit Victorian institutions undertaking medical research into the diagnosis, prevention or treatment of physical or mental illness in humans. She named it the L.E.W. Carty Charitable Fund in memory of her husband.

Olive was the sixth child of seven children born to John Bishop and Jemima Gibson MacVean.

Her father was a well known and respected accounting identity in Melbourne who had started the chartered accounting firm Burns Wilson & Bishop in 1900, later to become Wilson Bishop & Henderson, and today known as BDO.

Olive Carty’s brother, John Reginald (Rex) Bishop, who had joined their father’s firm in 1925 as a senior partner, was the financial advisor of Olive and her sisters until his sudden death on 31 January 1964. By the time Rex joined the firm, his father was the sole partner. Under their dual control, the business flourished. Rex Bishop had sound experience as a trustee of various estates and trusts, amongst which he was a founding trustee of the Helen Macpherson Smith Trust. After Rex’s death, the sisters remained loyal clients of the firm which their father and brother had developed to become the major accounting practice it is today.