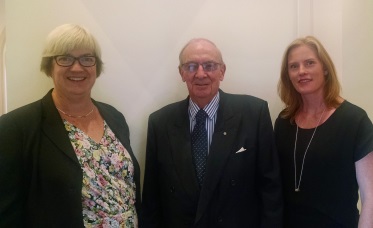 Dr Susan Forrest, BSc(Hons) DPhil(Oxon) B.Bus(Admin), GAICD, has been CEO/Director of the Australian Genome Research Facility (AGRF) since 2003, having been their Scientific Director from 2001. Prior to her appointment to AGRF, Sue had a distinguished career from 1988 to 2001 with Murdoch Childrens Research Institute (MCRI), a leading medical research institute specialising in paediatric disorders. She commenced as a Post-Doctoral Scientist and became the Head of their Gene Discovery Unit from 1996. Amongst her various awards, she was awarded the Helen Macpherson Smith Postdoctoral Fellowship at MCRI in 1988.

Ms Sally Wood has a Bachelor of Business (Victoria University) and a background in financial management. Her business roles include being Financial Accountant and Management Accountant at Austin Hospital Group from 2001 to 2007. Sally is a great niece of the founder of the L.E.W. Carty Charitable Fund, the late Olive Muriel Carty, who died on 26 February 1977. Olive Carty emphatically wished her benefaction to be named in honour of her late husband, Leslie E.W. Carty, a well-known Western District pastoralist. Sally’s appointment will continue a dedicated family connection with her great aunt’s benefaction which today supports many worthy medical research projects in Victoria.